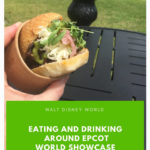 One of the days I was most looking forward to on our recent Disney World trip was a child free day with Hubby to spend drinking around the world at Epcot. Epcot has become famous for its eating and drinking around the World Showcase, and we have always wanted to experience this in the past.

By taking a grandparent on holiday with us and using the Disney transport system, we knew this trip would be the perfect opportunity. The fact that we were visiting during the Flower and Garden festival as well was an added bonus.

I was keen not to have too much alcohol as I didn’t want to ruin my own experience, or even suffer the next day, so Hubby and I decided we would share drinks if we spotted ones we both wanted to try. It’s also a good idea to try some of the many snacks and small plates from the food booths in the Pavilions if you’re visiting during a festival. Outside of any Epcot festival, you can still take advantage of snack and quick service meals in the many restaurants in Epcot.

Our day began with breakfast at Epcot in Starbucks with the largest Mickey shaped cinnamon bun I have ever seen.

The World Showcase fully opens at 11am so we took our time and soaked up the atmosphere as we made our way to the entrance.

Related Post – Things To Do At Disney World For Adults

We had debated on which way around we would walk. Naturally we walk anti clock wise, starting in Canada, however this time we decided to start in Mexico as we wanted a margarita. We decided it might be wise to start on spirits rather than end on them.

As we arrived at the Mexico pavilion we stopped at the Jardin de Fiestas booth for a Beef Torta, a sourdough roll with braised beef, avocado, pickles and jalepenos in a spicy Habenero sauce. This was a great use of a snack credit from a festival booth. It wasn’t too spicy at all despite the ingredients and we both really enjoyed this one.

There was never any doubt that we wouldn’t get a Margarita from Choza de Margarita. A frozen margarita cocktail available in lime, mango, strawberry, or Fiesta which is a blend of all three. We decided to share a Fiesta.

It was super strong so be aware of this, and we were glad we were sharing one. Each flavour was delicious, but if I go back again I think I would order a lime as it tasted the most authentic to me. We stayed a while in the Mexico pavilion to drink this one as it was so large, and well worth the price tag of $11.25.

Despite our best efforts, nothing jumped out at us from any of the food and drink locations in the Norway pavilion. Popular choices appear to be Icelandic white ale or the Troll Kreme spiked slush.

In China we stopped for another snack, and chose vegetable spring rolls which were amazing. Topping up with another drink, we decided to go for the Canto Loopy, a vodka and cantaloupe juice. This was quite refreshing compared to the frozen margarita and it didn’t take us very long to finish it.

I was glad we were stopping for snacks as well, and at this point we were very glad we had been responsible adults that morning and brought plenty of water with us as well. It was a hot day, and heat mixed with alcohol in the middle of the day is never a good idea if you’re not staying hydrated and eating.

It would seem the obvious choice to opt for a German beer in the Germany pavilion. Despite wandering around, nothing jumped out at us, so we didn’t sample anything in Germany. The popular choices appear to be the Pink Grapefruit Hefeweizen or the Warsteiner Dunkel.

I had my heart set on a Limoncello as I love a little after dinner tipple when we eat out in an Italian restaurant at home. Hubby spotted the pizza Toscana, a flatbread with sweet sausage, caramelised onion, mozzarella and parmesan from the Primavera Kitchen booth, so we stopped for another snack.

This was actually just what we both needed, and it was delicious. I love how some of the snacks come out from the festival booths with two small portions, making them perfect to share.

Inside the Italy pavilion, I spotted a Limoncello cocktail from the Via Napoli donkey cart, so we opted for this instead of seeking out just a shot of Limoncello. Whilst it was tasty, the juice didn’t quench my thirst and I think I preferred the Limoncello Mule drink I have tried on a previous trip to Via Napoli restaurant.

Last time we visited during Flower and Garden Festival, I had some amazing burnt ends from the Smokehouse festival booth. This year, they had upped their game and we enjoyed a beef brisket burnt ends and smoked pork belly slider.

We didn’t manage to eat this without making a mess, but wow it was delicious and I could have eaten plenty more of them. With garlic sausage, chorizo, cheese fondue and home-made pickle, this is well worthy of a snack credit.

We didn’t have any alcoholic drinks in the American Pavilion, but I would have chosen the frozen stagg lemonade from the Fife and Drum tavern.

Into Japan, a pavilion Hubby loves because there is a large pond with fish in. Just over half way around the World Showcase, I had decided to pace myself on alcohol at this point, knowing I wanted to try some in the later pavilions.

Popular choices in the Japan pavilion are the Sake or the plum wine, neither of which really appealed to me or Hubby.

The Morocco pavilion has a whole host of speciality drinks that you really should check out. In particular the Marrakesh Express, a rum based drink with orange and pineapple juices, or the Moroccan Sunrise a non alcoholic pineapple juice, strawberry and orange water drink.

Between Morocco and France, we stopped by the Florida Fresh festival booth for a key lime pie. This was on my to eat list before we had arrived and it didn’t disappoint.

I thought I was going to enjoy this all to myself as Hubby stated he didn’t like key lime pie, however after one bite, I found I was sharing it with him as he enjoyed it so much. I should have got another one!

One of the popular drinks around the World at Epcot is from the France pavilion. The Grand Marnier slush from the kiosk is a blend of Grand Marnier, rum, vodka and orange juice. This really is one of the best drinks in Epcot.

I almost stopped off for a macaron or two, but it had just started to rain so we decided to move on towards the Rose and Crown pub in the UK pavilion to shelter.

Despite visiting Disney World a few times now, we had never been inside the Rose and Crown pub or dining room. We had a lunch booked in the dining room during this trip, but we wanted to experience the English pub atmosphere as well.

As it was raining now, the pub was a little busier than perhaps normally, however we were served quickly and with a lovely smile. Our order of a glass of Pinot Grigio and a pint of lager cost us $25 with a tip, a little more expensive than in the UK, and perhaps one of the Mose expensive rounds we have ever bought.

The pub is exactly what I would have expected, and the theming was amazing. I would definitely make more of an effort to stop by again in the future.

I didn’t fancy a Canadian beer by the time I had finished my wine, so we didn’t stop for a drink in the end. There were some great choices on offer however such as Moosehead lager, or St. Ambroise Apricot Wheat Ale.

At this point we were slightly tipsy (I don’t think the sun helps) and completely full up after all that snacking around the world showcase as well, so we decided to wander back to Port Orleans French Quarter and enjoy some time to relax before going back out for dinner at Chef Art Smith’s Homecomin’ restaurant later.

How Much Does It Cost To Drink Around The World At Epcot?

Depending on what you’re drinking, I would suggest an average of $10 per drink. If you’re planning a drink in each pavilion then your average spend will be just over $100.

Can You Walk Around Epcot With Alcohol?

Yes you can, all your drinks are served in plastic glasses. We like to take our drinks and find a nice place to sit down and enjoy them.

What are the best non alcoholic drinks in Epcot?

Popular opinion for the best non alcoholic drink in Epcot is the violet lemonade, available from the festival booths during the many Epcot festivals through the year.