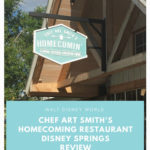 When we were booking our restaurant choices for Disney World this year, I was looking for places we hadn’t tried before. Chef Art Smith’s Homecomin’ restaurant at Disney Springs got great reviews so we decided to book for dinner.

Chef Art Smith’s is at Disney Springs in the Landing area. This is where a lot of the restaurants can be found. We took the water taxi from Port Orleans French Quarter and were dropped off in the Marketplace area.

We actually ended up walking around unnecessarily for a little while trying to find the restaurant, but I think that was down to my poor directions rather than anything else. There are plenty of Disney Springs guide maps around if you need them.

As we reached the restaurant, we noticed there is a lot of outside seating whilst you wait for a reservation, or perhaps enjoy a drink from he bar. As we checked in we were asked if we would like the first available table or whether we would prefer to wait for a particular table.

There are some outside tables at the back near the springs, which I imagine would be lovely. We decided to take the first available. Hubby and I had come back from a day at Epcot drinking around the World Showcase, so we were quite happy to sit inside.

I had heard good things about the food at Chef Art Smith’s so I was looking forward to seeing what was on the menu. The restaurant is based around using local Florida ingredients from farm to table.

You can expect to see a lot of chicken and barbecue meats on the menu. Their most popular dishes are the barbecue plate, a huge pile of shredded bbq pork, with sides of Mac and cheese with a cheddar biscuit.

The other famous item on the menu is the fried chicken and doughnuts. We were all intrigued by this dish that is served with sugar doughnuts and mashed potatoes.

Of course we had to choose the barbecue plate and also the fried chicken and doughnuts. Despite being warned the portions were large, we really weren’t expecting the size of the meals that arrived on the table.

I opted for the barbecue plate and when I was full to the brim, it looked like I had barely made a dent in my meal. I don’t often choose Mac and cheese as a side, but this was crispy on the top and gooey in the middle. There’s no thinking about calories eating this meal.

The barbecue meat was rich and succulent, falling apart in my mouth. It was delicious and I think I almost went into a food coma by the end of it. The poor cheddar biscuit just got nibbled at because I wanted to try it.

Hubby had the fried chicken and doughnuts and said it was one of the best fried chicken pieces he had eaten. It was a bit like having your main and dessert on the same plate with the dougnuts. He did eat the pairing together a few times and confirmed it did work. It was bizarre to eat chicken with doughnuts but it worked.

One of our party is gluten free and our server immediately requested for the chef to visit our table. He was amazing, and I’m just sorry I can’t remember his name. He spent ages at our table with us talking about the menu choices in general as well as how any of the dishes could be adapted according to a gluten free allergy.

We were really impressed with this, and instead of offering different choices, we were able to order the majority of items with a tweak. The only thing that wasn’t widely available were the desserts, and he actually suggested a bakery around the corner from the restaurant for dessert rather than enjoying one there.

As it turned out none of us could even contemplate desserts, we were so full. We opted to take a couple away with us for later, and the size of the chocolate cake that arrived was unbelievable. It was delicious though, we just didn’t eat it until the next day.